In early 2014 MILSIG released the M17 CQC and took the new MagFed market by storm. The M17 CQC quickly became the most popular gun in MagFed, to the point where MagFed and MILSIG became synonymous.

MILSIG is proud to introduce their new M17 A2. Utilizing the same polymer encased steel construction of its predecessor, the M17 A2 is an improved version of the same multi-role phenomenon the CQC became. Marksman and FSR, Close Quarter Combat and paintballs, or any role in between, the M17 has served them all with distinction.

The M17 A2 runs on a fully mechanical and internally regulated blow forward system called the HeatCore. The HeatCore has made its name with its extreme ease of maintenance, reliability, and unmatched consistency. While the HEAT Core is best known for its mechanical Full Auto function, its superb +/- fps consistency over the chronograph has won over many long range shooters where stable velocities are a must for accurate shooting.

The M17 A2 features MILSIGs new breech system which has been lengthened and widened to create an extremely stable feed path for today’s shaped projectiles. The M17 A2 accepts all current Square Head magazines from MILSIG plus the dozens of accessories available for previous models.

The M17 A2 makes use of its predecessors' updates and brings more features to the M17 platform:

*Please note that the m17A2 no longer includes the BRH or Hopper Kit.

Its working great and a nice rate of fire once its propely tune, recommand it 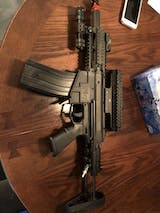 This marker is perfect all around great shooter very customizable.

Just received the M17. The build quality is great, and it shoots like a dream.

Shoots like a dream, feels great in the hand. Definitely a big upgrade over the original M17 CQC.

Shoots like a dream, feels great in the hand. Definitely a big upgrade over the original M17 CQC

More from this collection